On October 1st, thanks to our wonderful music and English teacher, Mag. Gundi Walterskirchen, we had the opportunity to visit the organ loft of the Salzburg Cathedral. Not only did we get to learn about the workings of the organ—how it is made of both tin and wooden pipes, how it is comprised of three separate sets of pipes, etc—but we were given somewhat of a private concert by the Salzburg Cathedral organist, Professor Heribert Metzger. 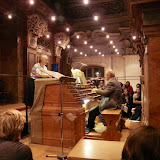 He played a beautiful piece by Johann Sebastian Bach, about whom we had recently learned in our weekly music class. It was so amazing to hear Bach’s composition on a real organ instead of just a recording! Afterward, he accompanied a piece that our very own violinist, John Hongel, had been practicing in anticipation of this day. Of course, it was also fantastic. We sat there in reverence , listening to the organ’s deep humming beneath the violin’s poignant melody, both echoing off the walls of the dark, empty cathedral. 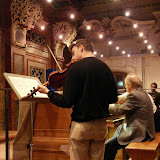 As if that wasn’t enough, the Professor Metzger then let anybody who wanted play on the organ themselves. Some classical pieces were played, then some popular music—Issa Santos, a music major, even sang some Adele while accompanied by the organ! Everyone enjoyed having such a great opportunity and we are very grateful to Gundi for making it happen.