Fall tour started off with a bang as we arrived after a morning bus ride in Ulm, Germany, home of the cathedral with the world’s tallest church steeple. Dr. Loos led us on a tour of the cathedral and at lunch, many of us chose to climb the 768 steps to the top of the spire! 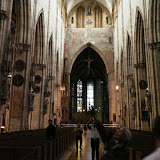 The rest of the day was spent on the road until we ended up in Metz, France, where we spent the night before heading off the next day to Reims (pronounced “R-eh-s” as we were told) and the famous cathedral that stands in its center. 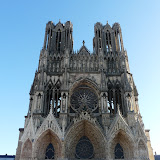 Afterward, we were given a tour of the Taittinger Champagne Cellar, which lies beneath what used to be a Benedictine Abbey. We even got to sample some of their most popular champagne at the end!
At the end of the day, we were finally in Paris. Though no group activities were planned for the evening, most of us ventured out, experimenting with the metro system, taking in the Parisian culture, and for more than a few of us, seeking out the famous Eiffel Tower. 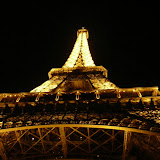 The next day was only the beginning of our whirlwind tour of Paris’s art and culture. We began on a positive note by attending Mass at the Cathedral of Notre Dame. Then we walked as a group to the Sainte-Chapelle, where we admired the walls of beautiful stained glass and other artful adornments. 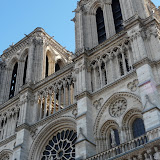 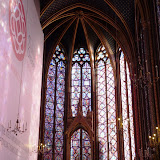 From there we visited the Musée Rodin to observe the many bronze castings and sculptures by Auguste Rodin. The Thinker, the Gates of Hell, and The Kiss were all works that we had the privilege to see in person. 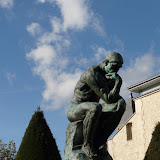 From there, many of us chose to follow Dr. Loos and Father Mark to St. Louis des Invalides to see the tomb of Napoleon I. The building itself was absolutely gorgeous, and the history served to add to our awe. Also, the weather had been more than agreeable all day, which is fantastic considering it was in the middle of autumn!
That night, Herr Steiner led us on a night tour of the city by bus. For many of us, it was helpful to get oriented in the huge city, and all of us enjoyed seeing the “City of Love” lit up for the night. Besides that, Herr Steiner’s commentary was very entertaining.
The following morning was spent at the palace and gardens of Fontainebleau, one of Napoleon’s favorite palaces. Inside, audio guides led us on a historical tour that taught us much about the many French monarchs that resided in Fontainebleau. Outside, we led ourselves through the expanse of gardens, all gilded with the bright colors of fall. 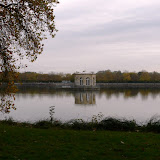 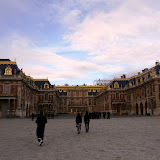 Another day, another palace: on Tuesday we visited the palace and gardens of Versailles (known to us in the political science class as the place where the Treaty of Versailles ending World War I was signed in 1918). The splendor of Versailles was even greater that of Fontainebleau—everything covered or laced with gold, adorned with beautiful tapestries, handsome sculptures, or elegant paintings.

The trip to Versailles was followed by a quick tour of the Musée Marmottan, home of several works by Claude Monet, among other impressionists.
Day six was marked by our visit to probably the most famous art museum in the world: the Louvre. There we spent the whole morning, all of us receiving a tour of the main masterpieces, then half of us spending the rest of the time seeking out the pieces they wanted to find or simply taking it all in. (Unfortunately, the other half had been led out of the museum by the tour guide and were not readmitted. Some returned the Louvre later that night to make sure they had seen what they wanted to, but everyone was able to see works like the Mona Lisa and the Coronation of Napoleon). Those who did roam through the enormous and quite frankly overwhelming halls were able to spy many works that they recognized from art history class, such as the Venus de Milo, Nike of Samothrace, interior frieze of the Parthenon, and even some famous pottery from the Archaic Greek period. 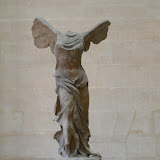 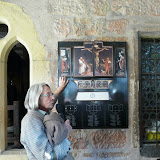 From there we walked to the Musée d’Orsay to see more wonderful art, including works by Toulouse-Lautrec, Rodin, Renior, Manet, Degas, and Monet. The impressionism exhibit was extremely interesting, and the whole museum—situated in a building that was once a train station—was magnificent.
The next day we sadly departed from Paris, arriving in the still-French city of Strasbourg in the evening. The quaint inner city boasted an impressive sandstone cathedral which we toured briefly and in which some of us attended an All Saints’ Day Mass. We spent the night in Strasbourg before setting out the next morning to cover the remaining ground to our beloved Salzburg.
Though fall break was drawing to a close, we still took the time to stop for a few hours in Colmar to see the Isenheim Altarpiece, a stunning triptych with three different setups—one for the weekday, one for Sunday, and one for holidays—each displaying its own intricate scene with painting or carving. 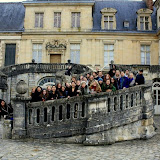 Dr. Loos uses one of the convenient models in the Musée Unterlinden to explain the layout of the Isenheim Altarpiece
Around six-thirty on Friday we returned home in Salzburg, exhausted but content, having seen, done, and learned so much on our tour halfway across France.