It would take pages of text to fully describe the fantastic experience our Salzburg group had over Spring Tour. We saw and did so many memorable things, there’s barely enough time in the day to describe them. Nevertheless, here is a brief overview of our time in Greece and Italy.
We began with quite a sprint, driving from Salzburg all the way to Ancona, Italy (that’s 500 miles!) in one fell swoop. Fortunately, we started the trip at 11 PM on Friday, so we soon drifted into sleep and attempted to stay that way until the morning, when we arrived. From there, we took a long ferry ride to Igoumenitsa, Greece and drove even further to Kalambaka, the town at the foot of the Meteora monoliths.
What a view from those craggy peaks! Isolated and mysterious, the monasteries atop the monoliths provided stunning views of the valley in its shroud of fog. One could promptly feel the seclusion and peace despite dizzying heights. We visited two monasteries the first day, Metamorphosis and Agios Stephanos, and a third, Rousanou, the next day on our way out of the city. 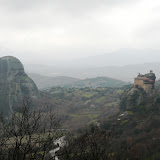 The next day was spent in Delphi, a pleasantly small city perched on the edge of the hillside right next to the famous archeological site where the legendary oracle once lived. 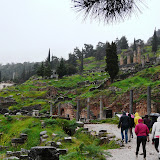 On Tuesday morning, our faithful guide led us, despite the rain, through the site and explained the history. Then we hopped back on the bus and drove down to Nafplio on the Peloponnesian peninsula, crossing over the Corinthian Canal on the way.
Wednesday was a memorable one. We departed from our beautiful hotel in Nafplio to visit the archeological site in Mycenae, a place we had studied in art history class. We had learned that Mycenae is not only famous for its “Lion’s Gate,” but also for its beehive tombs and large collection of beaten gold wares (housed in the museum in Athens, which we would visit later). 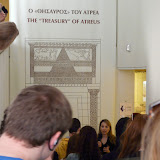 From Mycenae we continued to the archeological site in Epidauros, home of Greece’s best preserved ancient amphitheater, which we were sure to try out. 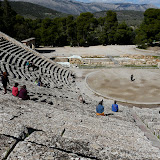 The next day we were lucky to be able to go to Athens: lucky since the day before had experienced a general strike, and the day after, the city flooded from rainwater! Because of this fortunate timing, we were able to visit the renowned Athenian acropolis with its iconic Parthenon, a structure we had spent quite some time studying in art history class as well. In fact, it’s safe to say we were all too familiar with those Doric columns, elaborate pediments, triglyphs, metopes, and interior frieze showing the Panathenaic procession. 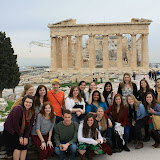 We were also sure to tour the National Archeological Museum in Athens, where we recognized an astonishing number of pieces from our art textbooks. Though we had studied Greek art early in our first semester in Salzburg, the distinctive art works were not easily forgotten. 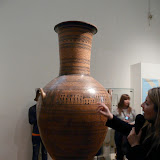 As a break from all our rigorous travels, the next day was given to us as free time, which we spent relaxing in Nafplio, Greece’s first capital. Like our guide in Paris once said, “travel is work!” So we were glad to have a day to unwind and enjoy the sights of this rather small coastal town. 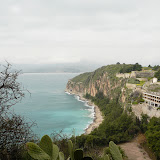 We began afresh the next day by visiting Olympia, where the Olympic Games started so long ago in 776 BC. There, blessed by a blue sky, we toured the ruins and took turns racing across the original track. The security guard even made an olive wreath and offered it as a reward for the fastest guy! 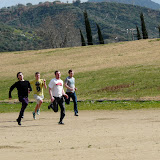 Our time in Greece ended on Saturday by getting on a ferry to chug across the Adriatic Sea once again. When we landed the next day, we were in Italy! Our first major destination was Pompeii, where we took of tour of the eerie city of ruins and were able to see some of its famed frescos firsthand. From inside its walls, we could see Mt. Vesuvius dozing nearby—and hoped it would stay that way! The next day we had plans to drive up to the mountain’s crater, but unfortunately the snow rolled in that night, and we had to turn around halfway up its steep slope. 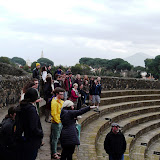 The next stop was where we (rightly) spent the most consecutive time: Rome! There was so much to do and see that it would be difficult to fit in an itinerary, so we were given much free time to explore the famous sites for ourselves. After the first days of organized tours of the Catacombs of Calixtus, Coliseum, Roman Forum, St. Peter’s Basilica, and Vatican Museum, nearly all set out to find those beautiful pieces we had heard so much about. 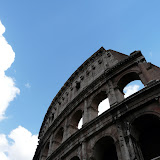 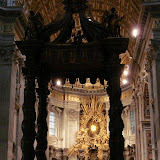 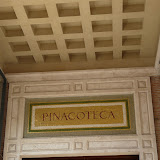 There were countless magnificent churches hosting all sorts of fine artwork, from Caravaggio to Michelangelo to Bernini. The entire city was like an enormous museum, bustling with activity concurrently frozen in time. Ruins lay here and there almost as if overlooked, beautiful statues of bronze or marble stood beside the rushing roads to be admired by passers-by. And admire we most certainly did. Many marveled at the Pantheon, the Galleria Borghese (my personal favorite!), Altare della Patria, Castel Sant’Angelo, and many more sights. What an opportunity to explore such a historic city, especially now knowing how much that history entails! 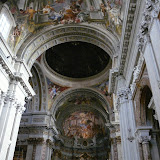 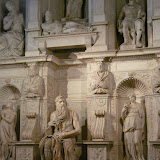 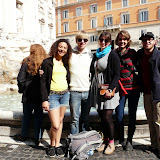 Saying sad goodbyes to Rome, its sights, and its gelato, we disembarked the first day of March to drive to Florence, taking a short stop in Assisi, hometown of St. Francis and several splendid churches featuring work by the proto-Renaissance artist Giotto. 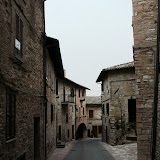 We spent two wonderful days in Florence, making sure to take advantage of the city’s vibrant culture in the form of art museums, public sculpture, and leather markets. The first day we visited the Accademia to see, among other works, the famous statue of David by Michelangelo, before embarking on a windy walking tour of the city. On that tour we stopped and admired the breathtaking Florentine cathedral and its adjacent campanile (bell tower) and baptistery, the former of which was the basis for the start of the Renaissance. The next morning, we were off again, this time to the Uffizi gallery, and words cannot describe how pleased we were when, around every corner, we came face to face with a work we recognized from our art history class! From Botticelli to Titian, Bellini to Van Dyke, that museum had it all. 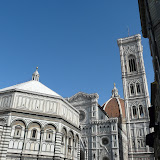 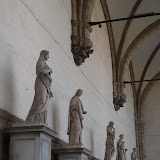 We moved on after two and a half days, driving to Padua by way of Ravenna: a quaint little town with some big points of interest. We took a guided tour of the churches Sant’Apollinare Nuovo and San Vitale, making sure to duck into the Galla Placidia Mausoleum. The mosaics adorning the walls and ceilings of these buildings were simply gorgeous. We had the good fortune of entering San Vitale just after a Japanese TV crew had finished filming inside it, while the bright lights they had been using still shone upon the glittering surfaces. 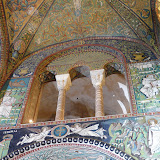 The official tour ended in Padua, after a short trip downtown to visit the Arena Chapel, one of the masterpieces of Giotto. From there, many departed to visit nearby cities like Venice or Cinque Terre. Others flew further away to Malta or England. Still others decided they were quite content with their whirlwind tour of two extraordinary countries and returned on the bus back to beautiful Salzburg. In the end, everybody was back safely by that Sunday, exhilarated, exhausted, and with nearly enough memories to last a lifetime.