Instead of a classroom the afternoon of Wednesday the 3rd of April, the students of Dr. Josef Außermair filed into a small, cozy back room of St. Mark’s Ukrainian Greek-Catholic Church in Salzburg. 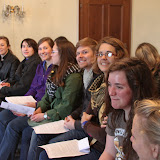 Surrounded by the familiar branches of Roman Catholicism and Protestantism, it is often overlooked that Christianity is a much broader faith—something that our field trip to this unfamiliar church was sure to emphasize. To begin our lesson, a Ukrainian Greek-Catholic priest, dressed in a plain grey tunic and wearing a long beard, talked to us about the history of his church. He was American-born, yet spoke of the Ukrainian church as his own. 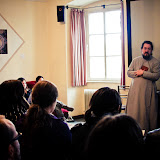 We learned of the middle-ground the UGCC had taken in the course of history, caught between Roman Catholicism and Russian Orthodox traditions and beliefs. I dare say that most of us were unaware that such church existed, so we were interested to hear about it.

After the lecture, we were brought into the church sanctuary, where we could admire the
iconostasis and where the priest continued to explain the meaning of such things to the church. 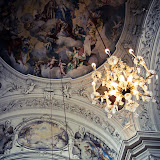 He spoke earnestly and with genuine honesty that was refreshing to hear, and I would say many of us could not leave the peaceful interior unaffected.