On Thursday, March 27th, a team from UP which consisted of: Paul, Simon, Patrick, John and Austin, was invited to the Tourism School in Klessheim to play futsal (indoor soccer).  Our team played teams from both the tourism school and a group of international students from Institute of Tourism and Hotel Management (ITH) Klessheim for a nice intercultural sporting activity.  There was some fast-paced and entertaining futsal being played by all three teams.  However, our team played well and with the help of the fans was able to win the tournament. After the games, the teams spoke with each other about schooling systems and different sports in their respective countries.  There was even a student from the tourism school who was a Seattle Seahawks fan! Everyone enjoyed their time during and after the event.  Below, are some of the pictures that were taken after the event. 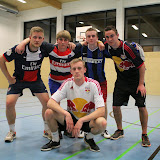 UP Team
UP Team
View at Picasa 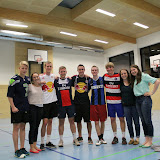