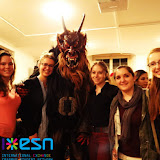 Students at the University of Portland Salzburg were invited to attend Erasmus’ cultural Advent event, and four of us decided to go.  The event took place in the Salzburg University church and was attended by many students from all over the world.  It included numerous short performances and presentations by event organizers, and a single student presentation from us.  The night began with the lighting of advent candles. Our own Annie Morach read an excerpt in German and lit a candle. After that, we listened to a beautiful traditional Austrian yodeling song.  We then heard the story of St. Nicolaus and Krampus, and proceeded to move to the center of the church to learn a South American Christmas dance.  Everyone was instructed to stand in a circle, which we moved slowly around in time to the music, with lit candles in our hands.  The next activity brought us outside, where we trailed a small group of singers who wandered to various doors of the church and sang.  This was meant to represent Mary and Joseph being constantly turned away when searching for an inn in Bethlehem before the birth of Jesus.  We finally came out of the cold and spent some time socializing and drinking glühwein.  Suddenly a terrifying Krampus appeared and stomped around the room.  Krampus are part of Austrian Christmas folklore and are said to punish disobedient children.  Fortunately, Saint Nicolaus came into the room and “defeated” Krampus, just like he does in Austrian legend.

Much to our relief, Krampus took off his mask after taking photos with the guests.  Once all this was done, we were asked to present, “The Night before Christmas,” an American Christmas poem that we had prepared to read.  We were the only group who had planned anything to present, but people payed attention and seemed interested. 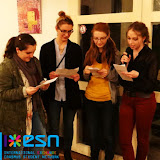 After that, we met a few more people, and then headed back to the center to study for Fine Arts the next day.

After attending the Advent celebration we were invited back for an International Dinner where people from many different countries made a traditional food or drink to share. Our group decided on the classic American sugar cookies and chocolate chip cookies. We decided on these because they are fairly popular during the Christmas season, which is when this event took place. Everyone seemed to like them and they were fun to make. Shopping for the ingredients was a bit of an adventure though since the baking ingredients in Austria are a bit different than what we are used to back in the States. Some of the other countries represented were Turkey, France, Austria, Germany, Kazakhstan, Italy, Slovenia, and Malta. 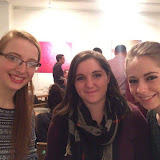 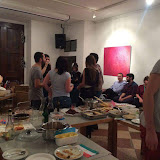 A few of the foods we tried were the French version of French toast which they call Second Day Bread, Italian pizza, a Turkish drink, and a Slovenian dessert. We also met people from all of these countries and they were all very nice and interesting to talk to. I believe we met people from a total of eleven or so countries. 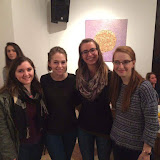 By attending these events, I have benefitted by meeting new people from other cultures. This has allowed me to learn how they celebrate to Christmas holiday and also what types of food are popular in the region in which they live. I love learning about new cultures so it was quite fun. I did have a view point that has changed in a sense. In America, people of Middle Eastern ethnicity have a bad reputation thanks to the actions of a select few. I have not been against the group as a whole, but I also haven’t met anyone from the area either. Now, after meeting a man and woman of Middle Eastern descent I have a new memory to associate with the people who have been unfairly and negatively branded due to a few bad people. In this sense I have grown to become even more open minded when meeting people (and trying new foods!). I have kept in touch with a guy from France who had fun telling me about France’s version of French Toast called Second Day Bread. We had never heard of French Toast though. I think these two events (the Advent event and the International Dinner) did make a difference for me as I learned a lot and had fun going to them as well. It was fun to go out of my comfort zone to meet new people and learn new things.

Hayley Lemmens conducted interviews about the events with Amy Swenson, Zoe Haenggi Wattenber, und Annie Morach.
Amy Swenson
What could you say you gained from attending this event – personally and/or academically?
I met a many people from a many countries at this event. I gained some knowledge of their cultures and customs. I enjoyed trying food and hearing stories from around the world.

Has it changed any of your views – if you had any before?
I found it incredible how so many people from such a variety of places could enjoy each other’s company. I wasn’t sure this kind of interaction would be successful, but it was. I also really appreciated that everyone communicated in English. I realize now that am very fortunate to have English as a first language.

In how far do you think you have benefited?
Experiencing different cultures and going out of my comfort zone to talk to strangers helped broaden the way I view the world. I never thought I would meet and have a real conversation with someone from Tajikistan or Malta. It’s eye-opening to see how much I have in common with people who seem to come from a completely different world.

Did you keep in touch with any of your new acquaintances?
Unfortunately, no.

Does it make any difference for you to have had this experience, or not?
I don’t think this experience changed me at all, but it was a lot of fun and incredibly interesting.

Zoe Haenggi Wattenberg
What could you say you gained from attending this event – personally and/or academically?
The Advent event gave me a deeper insight into the ways different cultures celebrate the same holiday. Despite coming from different places, everyone came together to share the experience of celebrating a holiday that is meaningful to them.

In how far do you think you have benefited?
I benefited from this experience in the way that I had the opportunity to meet and talk to people from all over the world. It was fun to go to event in Salzburg with others who are part of the community.

Did this experience help you grow in any way?
I became more aware of other cultures traditions.

Did you keep in touch with any of your new acquaintances?
Unfortunately, I did not keep in contact with anyone I met at the event.

Does it make any difference for you to have had this experience, or not?
It was very fun experience. I enjoyed meeting people from all around the world, and hearing a little about each of their lives.

Annie Morach
What could you say you gained from attending this event – personally and/or academically?
It was interesting to see how different cultures celebrated Christmas and the Christmas time. I also enjoyed hearing about it in German. And I had a picture taken with a Kampus, so that’s always good.

Has it changed any of your views – if you had any before?
Not particularly, though it is interesting to think of an actual defined advent season according to the Catholic calendar. Also, the Krampus tradition was interesting to learn about from those who had grown up with it.

In how far do you think you have benefited?
I learned more about Advent traditions, from those who had grown up celebrating them. I was also able to speak to fellow students and more about where they came from and their personal traditions.

Did you keep in touch with any of your new acquaintances?
Not really, though we are still connected to the group.

Does it make any difference for you to have had this experience, or not?
It was good to get out of the center and meet non-American people. It was also exciting to make our cookies and share the wonder of Chocolate chip cookies with everybody. We were also able to talk to people from very interesting places such as Malta, Slovenia, and Turkey. Everybody was very willing to share their culture and their food, which made for a very fun night. The Advent event was very good for me in that I could have connections outside the center and expand my cultural horizons.