Hayley C. Lemens offers an insight into her personal experience, which she gained during the tour and in many conversations with her fellow students and with people she met.    The views, opinions and positions expressed by the author and those providing comments on this post are theirs alone, and do not necessarily reflect the views, opinions or positions of the Portland Kulturprogramm or any employee thereof.

Spring Tour started off in Italy and officially ended in Italy. The towns and cities we visited were very different from each other and each had their own way of being interesting. These places include: Padua, Ravenna, Florence, Assisi, Rome, The Vatican, Montecassino, Pompeii, Vesuvius, and Venice. I think it is impressive that we were able to visit so many places across Italy. Personally, my favorite was Vesuvius because I have always had an interest in geography. I also had a lot of fun hiking the volcano and seeing the caldera. If I had to pick a favorite city I would have to choose Ravenna due to the beautiful mosaics within the churches and mausoleum. I found them to be incredible and I was impressed by how well preserved the mosaics are, especially for their age. If given the chance, I would definitely return to any of these places. This tour gave me a great foundation for future travels throughout Italy and I even know useful Italian words thanks to Gundi’s lecture!  Jonathan Simpson also agreed that he would like to return to Italy. “I would love to come back to Italy someday. It is one thing to say that you have experienced a culture for a small moment in time of a country’s history, but I believe that in order to truly experience all Italy has to offer, it would be beneficial to return someday to see how the culture has evolved with the times”. 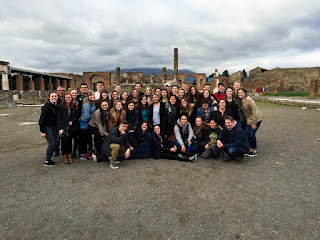 One of my favorite parts of visiting a new place is learning about the local culture through my experiences, rather than hearing about it from others or from literary sources. I think it is a better and more accurate way to learn about other places. Italian culture was interesting, especially compared to Greece and America, the other country that we visited and the country that we are from. The people of Italy were quite relaxed and openly friendly. They also take the time to enjoy their day rather than rushing through it like Americans do to get to TV time at home. This is similar to Greek culture but not exactly the same as every country is different. A fellow student stated that “the Italians, compared to Americans, have a very relaxed culture. It might not appear so on the surface, what with the crowds of people rushing through the cities, the locals shouting at each other in Italian and the soldiers armed with assault rifles that can be seen in every busy public area, but spend some time in a less touristy part of a city and you will begin to see the more laid back aspects of Italian life. In the United States, there is a notion that everyone always should be working, and that people who take long breaks during the day or spend an excessive amount of time eating their meals are lazy and don’t want to be successful. In Italy, however, the people tend to slow down and really try to enjoy lots of quality time with friends and family, almost as a priority as opposed to in the US, where it often seems like a luxury” –Jonathan Simpson. I also noticed that Italians tend to enjoy foods with carbohydrates a lot, or at least that was what was on the menu the most! It was all very good, but it was nice to arrive in Greece be greeted with vegetables and less carbohydrate options. 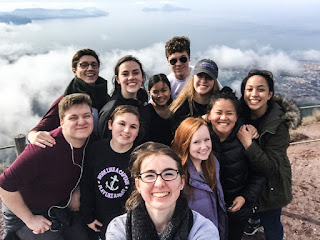 We did meet a few interesting people in Italy. In Padua Annie Morach and I met a woman who owned a small bistro-like shop where we got dinner. She did not speak a word of English but she still tried to talk to us! It was basically a conversation with charades and Google Translate. Still, I think it was a nice – and entertaining – conversation, and we learned about a traditional baked food that is unique to Padua from what we could tell, which was basically a scone with lemon and raisin pieces in it. We both thought it was quite good! Annie, Jonathan Simpson, and I also met a woman and her husband in the botanical gardens of Rome. It was an amusing experience because Annie and I had each bought a flower, but the woman though we had taken them from the gardens! We aren’t sure why she thought that since they were wrapped up prettily and not one sunflower or bird of paradise could be found in the garden at that time. At least we know that the gardens are well loved and protected! Our tour guides were also quite interesting regarding the information they gave, though we did like some more than others. 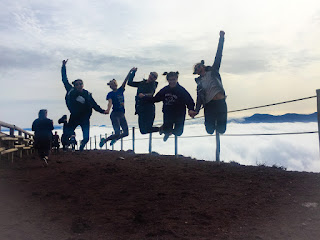 “I think I gained an appreciation for the culture of… Italy which [isn’t something] I’m familiar with” –Annie Morach. I would say that I also gained an appreciation for the Italian culture. I had always loved Italian food and I knew a bit of their history, but otherwise I did not know much. By spending so much time in Italy and traveling to so many places I came to learn and start to understand their culture. Previously I had heard that Italians are very pushy and ‘strange’, whatever that means. Maybe the Americans I talked to had just been to the very touristy parts and maybe they are not used to such friendly people. Who can be sure? It goes to show that one should not judge a culture by the opinions of others. 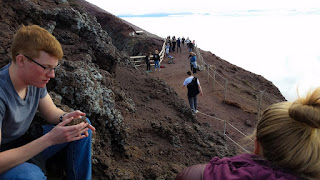