Hayley C. Lemens offers an insight into her personal experience, which she gained during the tour and in many conversations with her fellow students and with people she met.    The views, opinions and positions expressed by the author and those providing comments on this post are theirs alone, and do not necessarily reflect the views, opinions or positions of the Portland Kulturprogramm or any employee thereof.

For the second half of Spring Tour we found ourselves in Greece after a short ferry ride from Italy. We visited many different and interesting places from monasteries to ruins to cities. These places include: Meteroa, Kalambaka, Itea, Delphi, Corinth, Nafplio, Mycenae, Epidauros, Athens, and Olympia. We all loves Greece and were impressed that we were able to visit so many places with such variety. I would love to return to Greece as the history, architecture, art, and food were all absolutely amazing! One of our favorite parts was likely the food. We received four course meals almost every night and also one lunch as well. Italian food used to be my favorite, but now I would have to say that Greek has replaced it. I even bought a cookbook! My favorite place was Meteora as the monasteries were incredible. The art within them as well as the way they were positioned on rocks that look like they belonged to the Hallelujah Mountains in the film “Avatar”, were beautiful and picturesque. Annie Morach agrees; “I would love to come back, especially to Greece, because I feel like there’s so much more that I could do. The language is really cool, also, and I’d love to learn more about it. The fact that they kept feeding us mountains of amazing food is also a big plus”.  Additionally, my favorite part – not place – that our school planned was the olive oil tasting. It was very cool that the olive oil we tasted won the Gold Award in New York. Annie’s favorite part was different from mine. “My favorite stop is a tie between Nafplio and Delphi. Nafplio was amazing because I swam in the ocean at sunset, and in Delphi we hiked up a mountain in sunset. The landscapes of Greece are amazing, and being able to experience them like that was such an exciting opportunity”. 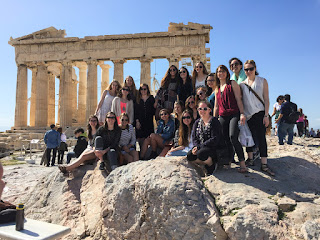 As mentioned in the post on Italy, I love visiting new places and learning about the local cultures through experiences. In America we learn about the Greek Gods and temples like the Parthenon, but we do not learn about the people. Then we also hear about the civil unrest and the recession in the late 2000s. This paints an interesting picture of modern Greece and her people. While being in Greece I learned that the people are extremely kind and welcoming, much like the Italians. But the difference, I think, is that the Greek are a much prouder and patriotic people. For example, one hears and sees that they want their sculptures that are in England back. These are known as the Elgin Marbles, which we learned about in Fine Arts, and they were more or less taken by Thomas Bruce while Greece was being controlled by the Ottoman Empire. The Ottomans did not care about the art that was being destroyed and stolen. Jonathan Simpson said the same; “The Greeks are a very proud people. They are proud of their country, proud of their culture, proud of their olives (rightfully so), and, most of all, proud of their ancient heritage. Any self-respecting Greek will try to remind the tourist population that Greece was once the cradle of western civilization, and that without Greece, the freedom and democracy that so many countries now enjoy may have never come to be. Frankly, this pride is a little disheartening. There, certainly, has to be a dichotomy in the collective minds of the Greek culture, one that appreciates and takes pride in the days of old, but also is forced to acknowledge that Greece is no longer in the best shape. Whether it is in regards to their economy, their security situation, or otherwise, every Greek must know that their golden hour in the span of history is 2500 years behind them. Long gone are the days of Pericles, replaced by massive debts to the European Union, a tense refugee crisis, and crumbling relationships with the rest of Europe. Of course, the social situation of many in Greece has improved since ancient times, but that is more of a product of the world progressing as a whole than an exclusively Greek achievement that they could take pride in. In this way, Greece is a country of two different minds: the old mind that revels in the ancient glory days, and the new mind that, while still warm and optimistic, must come to terms with the fact that they are not the great and influential power that they once were. That being said, they never failed to be a friendly and welcoming people”. Jonathan also gives a story to exemplify the welcoming Greek: “In Olympia… a man came up to me while I was putting my shoes back on (after calculating that my feet are bigger than Heracles’) and asked me where I was from. Following a conversation with him that covered topics from why Greek food is scientifically better than Italian food to how life is in the United States right now, he proceeded to shake my hand for a good thirty seconds and said, ‘Thank you, my name is John Papas, I was a taxi driver in New York for two years, and I wish you the best for your future’”. 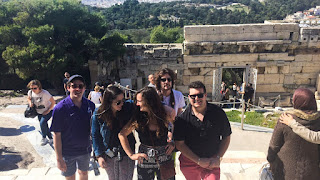 I too met some friendly Greek women. Annie, Courtney Otani, and I went shopping in Nafplio while we had some free time. We decided to check out a boutique that had a good sale going and promptly was engulfed in the welcoming arms of the two women running the store. They were showing us clothes and giving their opinions (likely a good sales tactic) but they also asked where we were from and what we were doing in Greece. It seemed as though they actually enjoyed the conversation. They also repeatedly complimented us on the fact that we all smiled a lot and seemed to be very happy, and also stated several times that Annie and I looked European due to our features. This, I think, also exemplifies how friendly the Greeks are. Courtney Otani also gave a statement that she loved the tour guide we had; “Niki was definitely my favorite person that we met; funny, sweet, engaging, and informative tour guide”. 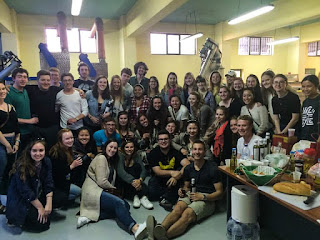 After spending time in Greece I would say that I learned to have a better appreciation of food, history, and culture. As I mentioned previously, what I have learned in class was just a small part of the whole that is Greece. Annie stated that she “gained an appreciation for the culture of Greece and Italy which aren’t things [she’s] familiar with. Greece was particularly interesting to learn about and be in”. Also, I learned to be proud of where you are from. I do not particularly like the United States when compared to Europe, but they have done and made some good things that benefitted the world. I think I will always consider myself more of a world citizen though, rather than an American one despite what my passport might say. I’d rather consider myself as a part of the world rather than one part of it.